In the outskirts of Windhoek, Namibia lies a special place, the Dolam Children's Home. A place filled with love, peace and hope. Read how the founder, Rosa Namises provides a second opportunity for vulnerable Namibian children!

Located at the end of a small, isolated street lies an ordinary building with an extraordinary story. Physically, it’s only 4 walls and a roof but for those living there it symbolizes family and offers a small light of hope in an otherwise dark and sad world. The creator of the building has a heart so big that, if she could, she would care for any child needing help in all of Namibia. This woman has dedicated and chosen to give everything up. Not for a second does she think about herself. Her thoughts, her actions and her decisions are all made with the children of the Dolam Children’s Home in mind. Rosa Namises is her name. If you’ve been connected with us for a while, you might have heard her story before and know the work that we’ve been involved with. We’d like to add and inform you about some updates that have taken place and how the Children’s Home has been affected during the pandemic. 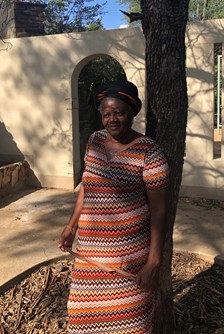 In the past, Rosa was involved in the government. She was fighting for justice, equality and right for children. However, she quickly realized the bureaucracy and at times, corruption in Government. She saw that even though she would only help a smaller population she would be able to ACTUALLY do something for them. She gave up her political career to focus on doing groundwork to help children.

One day, Rosa’s daughter had brought a friend from class home. This wasn’t unusual; Rosa’s home was always open! What was unusual was that the little girl didn’t leave to go to her home even as darkness was approaching and creeping in over the outskirts of Windhoek. Rosa asked the girl if she wanted to go home. The girl responded with a firm and determined: “NO.” Shocked at the answer, Rosa decided to drive the girl home. They arrived at a home less than suitable for living. That wasn’t the worst to come. Behind the small home was an old, rusty car, falling to pieces. Inside the car lie the little girl’s mother: drunk, high and unable to care for her daughter. Rosa’s heart burst into a thousand pieces. She couldn’t let the little girl stay in an already dangerous neighborhood without a home to feel safe. She let the girl stay at their home for the night. What she was yet to discover was that that night would become a turning point in her life. From that time, she would no longer have her own interests in mind. She would not try to realize her personal dreams.

Rosa knew that the little girl was just one out of hundreds of children in the Katutura area suffering and living in unsuitable accommodations with guardians not being able to take care of their own children. Katutura is not a walk in the park. People know when you don’t fit in. They stare you down, talk behind your back and outright tell you to get out! How does a child feel growing up in that environment? Naturally, not great. However, having a safe home to get back to where you can relax can ease the situation. However, with poverty comes violence, rape, alcohol and drugs. These are the things causing unsuitable accommodation for the children. The effect that the environment has when children don’t have guardians or have been abandoned making the children fight for their own survival on the streets is no life. It damages the definition of childhood. Driving in the good parts of Windhoek, you will see this first-hand. Boys and girls begging at traffic lights, gathering enough coins for the next ‘high’. You look into their eyes and all you see is nothingness. No goals. No trust. No hope. No dreams. No purpose. Nothing! That hurts. It crushes one’s heart and realizes how many things I’ve taken for granted!

These are the lives that Rosa wants to and is changing! She opened her private home and got authorized to run a Children’s Home. She is the go-to Children’s Home when Social Services in Windhoek gets a case in. She loves and cares for each one of the children like where they her own. She doesn’t just care for their basic needs. She creates a family framework to grow up in. She owns a small plot of farm an hour’s drive outside of the city. Every summer she brings all the children up there to go on a vacation – grow vegetables, play games and have fun! Every morning she drives them to school, plays music and talks with each child. 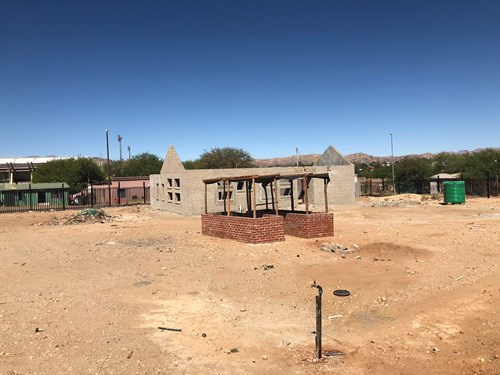 2 years ago, through a fundraising she gathered enough money to create a new building with a safe fence to protect the children. This is the ‘ordinary’ building with the not so ordinary story. Tears and sweat has resulted in this building. The pandemic has really proved to be a difficulty. Donations decreased. Patrons withdrew. What remained was Rosa with rising bills and invoices to be paid. But Rosa doesn’t give up. She fights! She innovates. During our conversation at the orphanage, she gets a call. Another child will be dropped off by Social Services. Even though Rosa doesn’t at that moment know with what money she will take care of the child and cover costs for schooling she knows that she will figure out a way. She always has. Recently, she started growing vegetables to reduce food costs and any excess vegetables they sell to make a minor income.

She’s gotten her own back after 20 years. She admits that she enjoys the peace and calm of having her own place but wouldn’t change her journey for a thing! It’s made her who she is. The pandemic has made her expand in new ways. On the property stands an odd blue metal building. Naïve as I am I asked whether it was for trash. She answered, smiling: “Max, see the potential. This was donated from an old school building. It doesn’t look like much but in 6 weeks volunteers are coming and we’ll convert it to a library/computer room for virtual lessons”. Red in my face and embarrassed I acknowledged that I hadn’t seen the potential.

It's now more than 5 years that Master International first visited the Dolam Children’s Home. Owner of Master International, Norbert Mörtl and his family went down the first time and visited, helped teach the children, provided food and donations for electricity water and every year has personally visited the orphanage! Why all the effort? Because we value people.

See the picture below of the current standing: 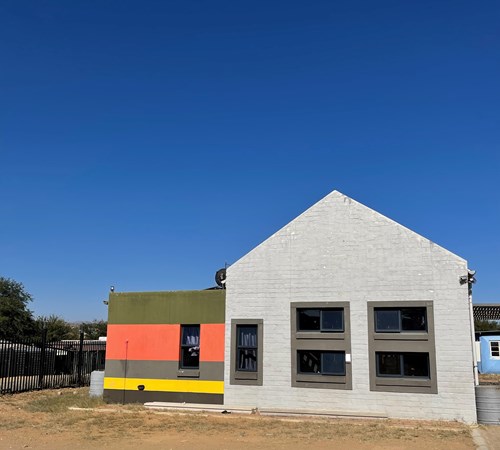