What you need to know about a Cognitive Test?

When we look at cognitive tests it’s necessary to differentiate and understand the fundamental differences between a speed and a power test and where our solutions fall between.

A power test takes into consideration what the maximum level of performance is. The questions in a power test range from easy and go until very complex. Generally, everybody completing the test will have enough time to do so. However, where the test differentiates is that those completing the test having high cognitive ability will get the more complex questions correct. The basis of the score is therefore based on the level of difficulty with correct answers.

A speed test, however, has questions of “uniform type” and a simple level of difficulty. If allowed with enough time, generally, most would be able to answer most of the questions correctly. However, in a speed test, time is limited and that means that the respondent either has to give quick answers (with the risk of a wrong answer) or leave some undone. The score is determined based on the number or amount of correct answers.

Most cognitive tests available on the market today are a mix of both tests (speed and power), which are also called “speeded power tests”. This means that the test is built up in a way that the question start off easy and get more and more challenging. However, a time aspect is also added, which means that it is hard to answer all the questions before time is up. This means that the difficulty of the questions may differ, but speed has a very strong influence on the score.

However, regarding speeded power tests many are of the opinion that being able to solve many problems fast is equal to being capable or able to solve more complex problems. Although a correlation between the two statements does exist, being fast at answering questions does not mean that the person is good at handling complexity.

Using speed as a measure of power can be difficult or challenging due to the practice effect. If a candidate has tried a similar test or questionnaire with similar questions, or if the candidate has a good testing strategy, that can increase the score, compared to people not using such tactics.

At Master International, we have developed the cognitive test, ACE. ACE measures and uses a balanced use of power and speed. This is done as liberal time is given to the respondent to answer the questions, meaning that time is not a stressful factor. In addition, it measures the level of difficulty when the respondent answers correct and additionally the speed of which the question was answered compared to a norm for each question. By measuring speed and power independently allows for accurate and detailed descriptions of speed and power used in logical and analytical reasoning.

Cognitive tests may be build up based on different layers. We can only speak from our own experience and knowledge. We work with three layers:

Below you’ll fine examples which explain and demonstrate what a question for each layer might look like. A question from the verbal section could look as follows:

In this item you will be provided with some information. Read this information carefully.

Solve the item by ticking the box opposite the correct answers. Thomas, Sarah, Max and Maria are 36, 39, 41, and 43 years old. Work out each persons’ age when you know that: 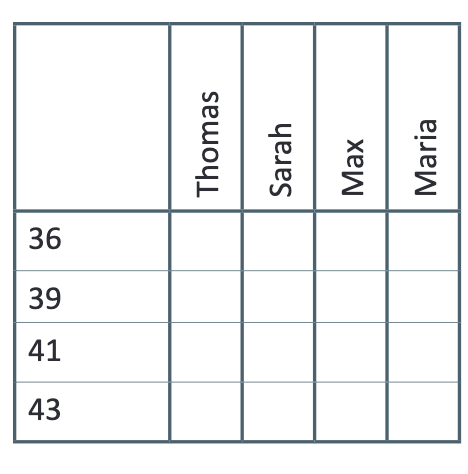 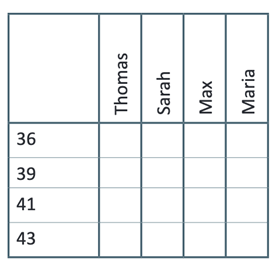 A similar question sound as follows:

A question based on the spatial section could sound as follows:

In the following item you must find the relation between the nine figures. One of the nine figures is missing. Select the figure you think best fits the context from the six response options below. 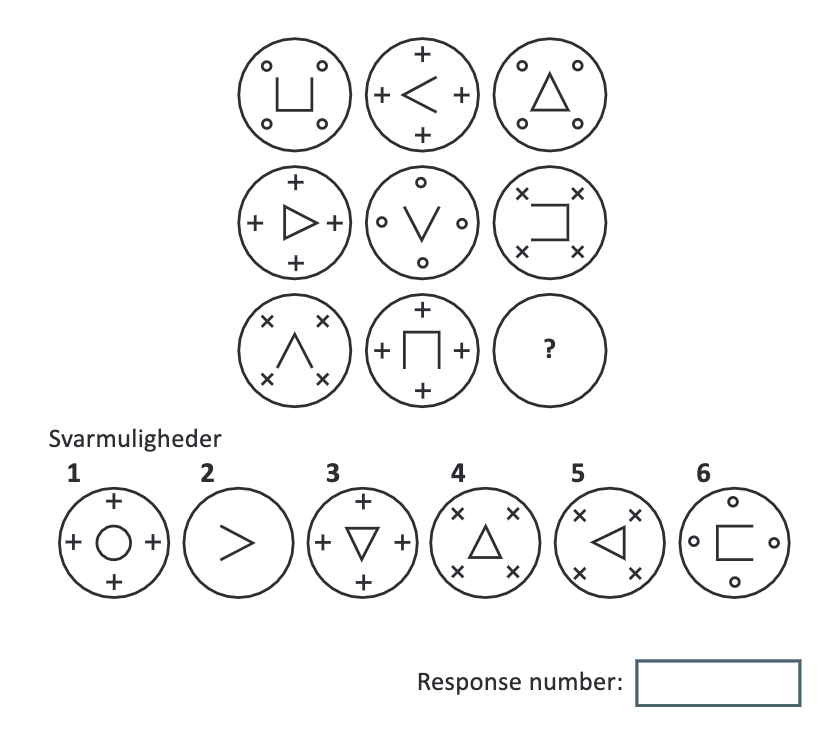 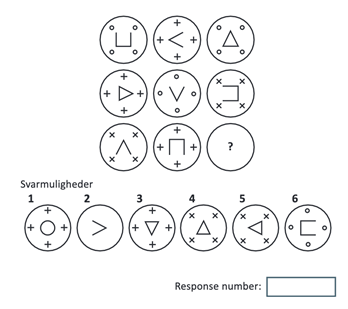 A question from the number section could sound as follows:

Read the information below carefully, and then answer the question. Your answer must be in round figures.

How much money did Cecilia get?